Born at Sagamore Farm in 2011, Nest of Pirates by Tiznow out of Salsa Star is half-brother to Chubby Star, who is currently entered to run in Race 2 at Gulfstream Park this Saturday, January 28.

After his racing career with many races at Laurel Park and Pimlico, Nest of Pirates is now retraining with Amy Bunt and goes by the barn name “Nico.” We are excited to share that he placed 2nd at his very first show completing a Dressage Test! 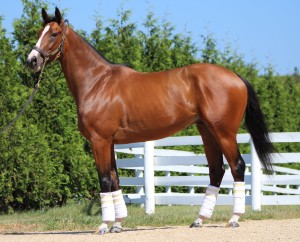