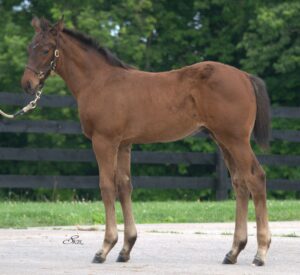 Global Campaign as a foal at WinStar.

This is the first of two stories written about Global Campaign by Jesse Johnson.

“Good horses know that they’re good,” said Hunter Rankin, president of Sagamore Farm. “They have that alpha mentality and they act like they’ve been there before.”

With a pedigree that has winning in its blood, some of those genetics are destined to be passed along to those who come from it.

Global Campaign was born in 2016 as the third and final foal of Globe Trot (A.P. Indy,) a mare who lost her life after delivering the horse. Global Campaign also has two half-brothers from Globe Trot: Sonic Mule (Distorted Humor,) a Grade II-stakes winner, and Bolt d’Oro (Medaglia d’Oro,) a Grade-I stakes winner.

“To have three foals and all of them be stakes winners is almost unheard of,” said Stan Hough, Sagamore Farm’s head trainer.

His sire, Curlin (Smart Strike,) is known for having a successful racing career including a Grade-I Preakness Stakes win and taking first place in the Dubai World Cup and the Woodward Stakes, a race Global Campaign also won.

Curlin also has a significant link to Sagamore Farm; one of his distant relatives is Native Dancer, who was raised at Sagamore and went on to become one of the greatest racehorses in the history of the sport.

“When you go to the jewelry store and you buy a fine jewel, that’s him,” Lazaro Cruz, an assistant horse trainer at Sagamore, said. “You don’t find those horses around too often.” 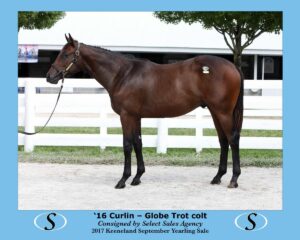 A sale photo of Global Campaign from Keeneland, 2017.

Growing up, Global Campaign garnered high praise from those who worked around him for his behavior and his physical stature. Donnie Preston, the yearling manager at WinStar Farm, had Global Campaign when he was a foal and said the horse was easy going and straightforward as he grew.

Global Campaign was put up for auction at Keeneland in September 2017 and was passed over by many buyers at the auction due to epiphysitis in one of his knees, making them look offset. The condition did not deter Hough and Rankin from purchasing the horse, however.

“I remember being excited to see him,” Rankin said. “We thought we had a chance at him and we knew we loved the family.”

After the sale, Global Campaign was sent to Ocala Stud in Florida to be broken by David O’Farrell and his team. O’Farrell was also part of the purchase and said he was worth taking a shot on. 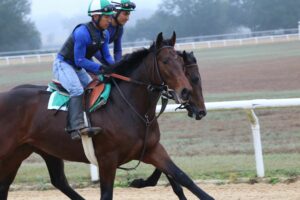 “[He was] the kind of horse that would do everything you asked of him,” O’Farrell said. “He kind of has all the makings of what a great racehorse should be.”

Horacio De Paz trained with the horse following its time at Ocala in 2018 as a 2-year-old and said after it had breezed a few times at Churchill Downs, he started to stand out amongst the other horses in the stable.

“If you were to describe it in sports, he would be one of those star athletes in high school that does everything as if he’s a college player,” De Paz said. “His mechanics were very flawless and strong for a 2-year-old.”

Hough took over training the horse while he was still a 2-year-old but said he really began improving upon his previous training after his third birthday.

Global Campaign was able to win his first start after at Gulfstream Park in January 2019, according to Hough, and also won his next start in an allowance race in the same track the next month. When he entered the Fountain of Youth race in March at Gulfstream, he placed fifth and injured himself in the same race after grabbing himself when running. 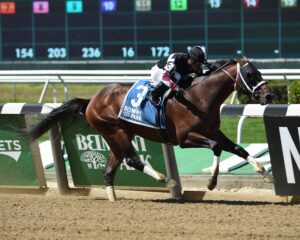 Global Campaign at the Peter Pan Stakes at Belmont, May 2019. Photo by Elsa Lorieul.

Hough said the training staff was able to get the horse through the injury with special shoes and keeping the weight off of the injured foot. In his first race after the injury, Global Campaign entered the Grade-III Peter Pan Stakes, at Belmont in May 2019 and finished first. But the injury appeared to linger after the win, and it was clear after finishing third in the Jim Dandy Stakes in July that Global Campaign would need to miss some time.

“We laid him up through the winter and he had, total, about six months before he got back to running shape,” Hough said.