Publishanditerate (Tapit – Katherine’skadence, by Mr. Greely) was born and raised at Sagamore Farm. He raced for Sagamore and trainer Horacio De Paz and in the second half of his career for Flying Pheasant Farm and Mary Eppler. He broke his maiden at Laurel Park and continued to race there making easy for us to stay in touch with his connections!

When “Pubby” retired from racing he was adopted by a wonderful couple to begin his next career! Pubby always had a very sweet disposition and everyone that had worked with him over the years adored him. In retirement, Pubby began learning about Fox Hunting. In 2019, we were so proud to see Pubby and his owner Keith take on the Retired Racehorse Project Thoroughbred Makeover. They shipped to Kentucky and competed in a very large and challenging division. They just finished the local fox hunting season and after some downtime will enjoy a fun summer of adventures together!

We thank all of Publishanditerate’s racing connections and his current owners for giving him such a wonderful life, and for sharing his journey with us! 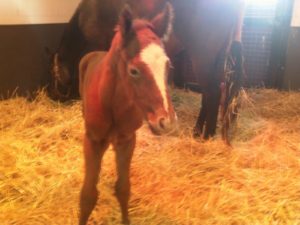