Come Around (Midshipman – Joined Forces, by Dixie Union) was born in New York and purchased by Sagamore in 2014 at the Fasig Tipton Mid Atlantic Two-Year-Olds in Training Sale. He raced a few times at the age of two for Graham Motion before being sent to Sagamore for some downtime. Come Around returned to racing at four years old and was strong in all of his starts, winning and placing at Saratoga and Belmont for team Sagamore and Horacio De Paz! Come Around retired and after plenty of downtime at Sagamore, he began retraining.

Come Around began the retraining process at the end of 2019. He settled in well at his new barn and was a pleasure to work with as he had the same great disposition he had as a racehorse. We took things slowly to allow him to get comfortable and used to being back in work. Once back under saddle, Come Around progressed beautifully, he was a quick learner and eager to please. His calm demeanor allowed us to continue taking things slowly and doing things the right way. After just two months of under saddle work, we knew he would be ready to do more and could begin looking for his forever home. Come Around struck gold when he was adopted in March of 2020 by a wonderful couple! They were very excited at the prospect of developing a green horse and they had the right qualifications and experience to do so. Come Around joins another OTTB brother – who he is of course already best friends with! We can’t wait to see what fun adventures he will go on with his new family, and we are so happy he has a loving forever home!

We will leave you with one of our favorite Come Around photos –  below he is hosting a tour of Elkridge Harford Hunt Pony Clubbers back when he was in training at Sagamore! 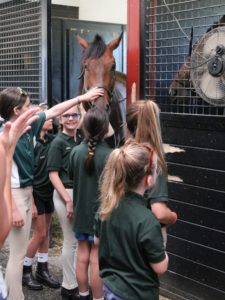 For more information on our Sagamore retired racehorses, please visit our Next Move page!