If you want to find Horacio DePaz on the grounds of the Oklahoma Training Track, you really have to work at it.

DePaz does not have a big, sprawling spread in the barn area at the spacious Oklahoma, located across the street from Saratoga Race Course.

He trains 10 horses for Sagamore Farm in Maryland and his stalls are tucked in rather inconspicuously at Barn 81 on the Oklahoma, which is known more for housing the thoroughbreds that run in the famous cherry red and black colors of the Phipps family. But DePaz doesn’t mind the anonymity. He is here to train his horses and try to win races.

So far, he has been doing OK. In six starts at the tough Saratoga meet, DePaz has two winners. He’ll try for a couple more this weekend when he runs a pair of 2-year-old fillies in the Grade II Adirondack on Saturday and a 2-year-old colt in Sunday’s Grade II Saratoga Special. 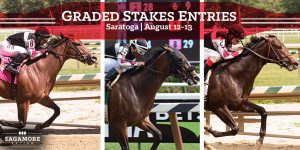 “I usually don’t come up here to fill the race,” DePaz said while standing outside one of his stalls. “We try to bring something that has a shot at competing well. All three horses are live. I like them. They’re all doing really well.”

“(Southampton Way) recovered after that race really good, so we’ll move forward,” DePaz said. “The other filly, we’re taking a shot. It seems like this might be a light field (six other fillies are entered), so, hopefully we can get some black type.”

In the Saratoga Special, DePaz will run a colt named Barry Lee, who is coming off 61/2-length maiden win at Laurel in July.

“We try to bring something that has a shot at competing,” DePaz said. “I think all three of these horses are live. I like them all. They are doing really well.”

The weekend could be a big one for the 32-year-old trainer. Just getting young horses run in graded stakes races at Saratoga is and accomplishment in itself.

“You just hope,” DePaz said. “You hope it’s not going to be the best effort they’re going to give you. A case like (Barry Lee), he has shown the class to be able to compete in a graded race as a 2-year-old. He has been working with older horses and he does it in a relaxed manner. He is not a nervous, panicky type. He enjoys what he is doing.”

DePaz has been training on his own since 2014. Before that, he worked four and a half years for trainer Todd Pletcher. He was an exercise rider for a time and also was part of the team that worked with Pletcher’s horses when he had a string in California.

Earlier this year, DePaz schooled the teacher when he beat Pletcher in the Tremont at Belmont Park. Pletcher, as he has been known to do, had multiple entries in the Tremont. He saddled four horses in the eight-horse race. DePaz won with his lone starter, He Hate Me.

“I showed up with one horse,” said DePaz, who is from Texas. “It probably wasn’t (Pletcher’s) best day, but we joked about it. He’s a good guy.”