This Sagamore-bred champion from the Vanderbilt era was never the champion on the racetracks, but by the spring of his 5-year-old season in 1952, Jam had found his true calling in an entirely different playing field: jumping hurdles. 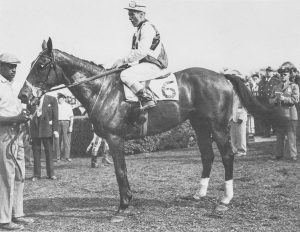 Jam, by Impound out of Cherry Orchard, made his debut in hurdles in April of 1951 and won. Out of his first five jump races, Jam acquired three wins. This was the beginning of Jam’s long and successful career as a steeple horse.

In 1952, Jam began running exclusively in jump races, tackling some of the best competition in the industry. Of his five wins in 1952, the most impressive was his win in Delaware Park’s Indian River Steeplechase, which Jam won by 20 lengths and took two seconds off of Elkridge’s course record. In Belmont’s Brook Steeplechase Handicap, Jam also defeated Oedipus, who went on to be in the United States’ National Museum of Racing and Hall of Fame.

Jam’s bold and powerful jumps put his name down in history as one of the top steeplechasers of all time.