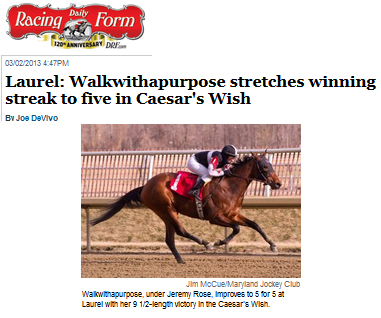 After watching his filly Walkwithapurpose cruise to her fifth straight victory in Saturday’s $100,000 Caesar’s Wish Stakes by 9 1/2 lengths, Correas admitted he would like to see Laurel Park’s winter meet continue for a while longer instead of ending on March 30.

“I wish we had another month at Laurel,” Correas said after the 3-year-old Walkwithapurpose ($2.80) ran her Laurel record to 5 for 5, including three stakes, by completing a mile in 1:38.38 under jockey Jeremy Rose.

Instead, Correas will have to get Walkwithapurpose geared up for a new challenge and a new racetrack. She will be asked to handle two turns for the first time in the $75,000 Twixt Stakes for 3-year-old fillies going 1 1/16 miles. That is a prep for the Grade 2, $500,000 Black-Eyed Susan Stakes on May 17.

“We’ll find out if she likes two turns and she likes Pimlico,” Correas said. “Then I would love to run her in the Black-Eyed Susan.”

Walkwithapurpose did have to deal with some early pace pressure from stretch-out sprinter through the first half-mile in 47.29 seconds, but opened up a clear lead with about a quarter-mile remaining and won for fun.

“The plan was to break sharp and if they wanted to go fast enough to clear us they’d have to be fast and they weren’t quite fast enough,” Rose said. “I was happy to see she got pressure and still respond. I think she has more there. I thought this was the most impressive performance because she was pressured. She responded with a lot of class.”

The one-mile Caesar’s Wish turned out ideally for Correas and owner Sagamore Farm. In addition to the winner, the connections also sent out Listen Boy, who finished second at 45-1.

Correas said he was expecting a good performance from Listen Boy, despite two ugly looking past performance lines in her last two races.

“You had to draw a line through those last two races,” Correas said. “She ran once in the mud and the other time she nearly fell on the second step out of the gate and found herself 15 to 20 lengths behind. She will be even better once she gets on the grass. Of that, I am sure.”