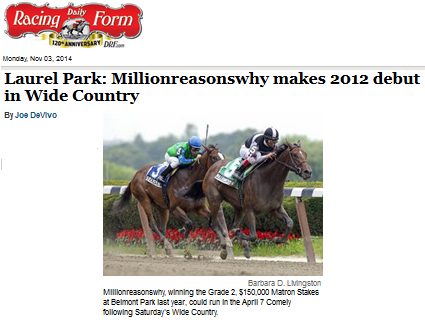 Trained by Ignacio Correas for Sagamore Farm, Millionreasonswhy is reportedly using the seven-furlong Wide Country as a prep for the Grade 3, one-mile Comely at Aqueduct on April 7. She was given the rest of the season off following a neck loss to the undefeated My Miss Aurelia in the Grade 2 Adirondack at Saratoga last August. In her other two starts, Milliionreasonswhy came from 9 1/2 lengths off the pace to score by four lengths in a 5 1/2-furlong maiden race at Colonial Downs, then moved directly to graded stakes company to take the Grade 2 Matron by two lengths at Belmont Park.

Based on her two most recent works, Millionreasonswhy looks ready to fire fresh. She followed up a bullet five-furlong move in 59 seconds on Feb. 17 with a best-of-45 four-furlong breeze in 48.20 seconds eight days later.

The main threat among Millionreasonswhy’s nine opponents is Dance to Bristol, a two-time stakes winner who comes off a 5 3/4-length score in the six-furlong Marshua at month ago. Dance to Bristol, trained by Charles Town-based Ollie Figgins III, may be a bounce candidate after soaring to a career-best 91 Beyer Speed Figure in the Marshua.

Plum and Doe are both wheeling back just a week after racing. Plum, locally based with high-percentage trainer Rodney Jenkins, cuts back in distance after racing last throughout last weekend’s 1 1/16-mile Busher at Aqueduct. She has 3 wins and 1 second in her 4 starts at Laurel.

Doe, who has already raced 14 times since beginning her career last June, will be making her third start since Feb. 15 after opening her 2012 campaign with back-to-back wins against optional claiming competition. In her most recent effort, which came last Saturday, Doe scored by two lengths going a one-turn mile.