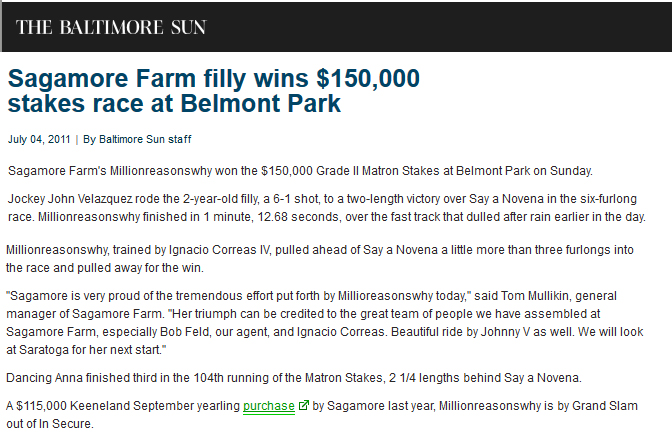 Jockey John Velazquez rode the 2-year-old filly, a 6-1 shot, to a two-length victory over Say a Novena in the six-furlong race. Millionreasonswhy finished in 1 minute, 12.68 seconds, over the fast track that dulled after rain earlier in the day. Millionreasonswhy, trained by Ignacio Correas IV, pulled ahead of Say a Novena a little more than three furlongs into the race and pulled away for the win.

“Sagamore is very proud of the tremendous effort put forth by Millioreasonswhy today,” said Tom Mullikin, general manager of Sagamore Farm. “Her triumph can be credited to the great team of people we have assembled at Sagamore Farm, especially Bob Feld, our agent, and Ignacio Correas. Beautiful ride by Johnny V as well. We will look at Saratoga for her next start.”

Dancing Anna finished third in the 104th running of the Matron Stakes, 2 1/4 lengths behind Say a Novena.

A $115,000 Keeneland September yearling purchase by Sagamore last year, Millionreasonswhy is by Grand Slam out of In Secure.