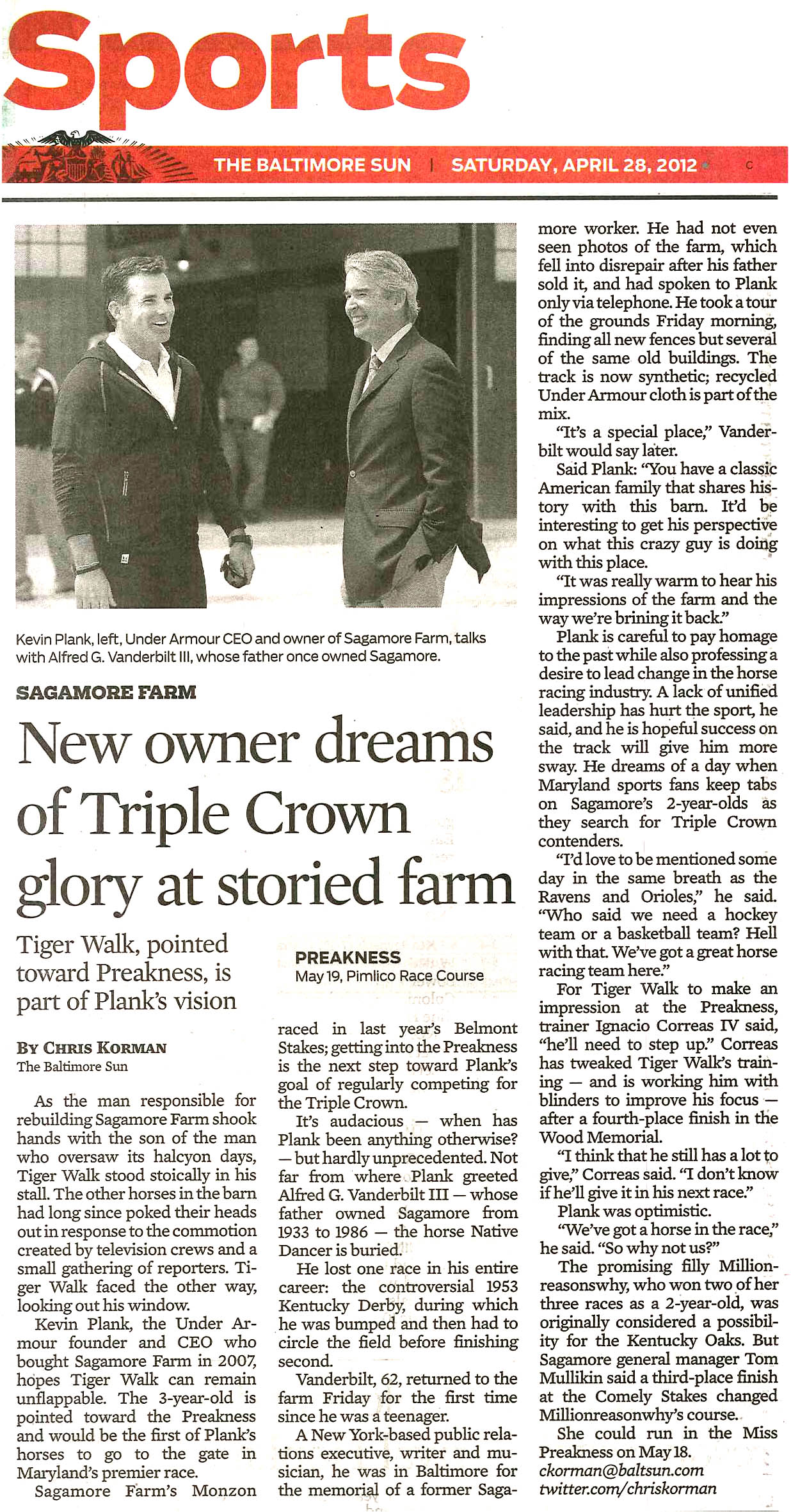 As the man responsible for rebuilding Sagamore Farm shook hands with the son of the man who oversaw its halcyon days, Tiger Walk stood stoically in his stall. The other horses in the barn had long since poked their heads out in response to commotion created by television crews and a small gathering of reporters. Tiger Walk faced the other way, looking out his window.

Kevin Plank, the Under Armour founder and CEO who bought Sagamore Farm in 2007, hopes Tiger Walk can remain unflappable. The 3-year-old is pointed toward the Preakness and would be the first of Plank’s horses to go to the gate in Maryland’s premier race. Sagamore’s Monzon raced in last year’s Belmont Stakes; getting into the Preakness is the next step toward Plank’s goal of regularly competing for the Triple Crown.

It’s audacious — when has Plank been anything otherwise? — but hardly unprecedented. Not far from where Plank greeted Alfred G. Vanderbilt III — whose father owned Sagamore from 1933 to 1986 — the horse Native Dancer is buried. He lost one race in his entire career: the controversial 1953 Kentucky Derby, during which he was bumped and then had to circle the field before finishing second.

Vanderbilt, 62, returned to the farm Friday for the first time since he was a teenager. A New York-based public relations executive, writer and musician, he was in Baltimore for the memorial of a former Sagamore worker. He had not even seen photos of the farm, which fell into disrepair after his father sold it, and had spoken to Plank only via telephone. He took a tour of the grounds Friday morning, finding all new fences but several of the same old buildings. The track is now synthetic; recycled Under Armour cloth is part of the mix.

Said Plank: “You have a classic American family that shares history with this barn. It’d be interesting to get his perspective on what this crazy guy is doing with this place. It was really warm to hear his impressions of the farm and the way we’re bringing it back.”

Plank is careful to pay homage to the past while also professing a desire to lead change in the horse racing industry. A lack of unified leadership has hurt the sport, he said, and he is hopeful success on the track will give him more sway. He dreams of a day when Maryland sports fans keep tabs on Sagamore’s 2-year-olds as they search for Triple Crown contenders.

“I’d love to be mentioned some day in the same breath as the Ravens and Orioles,” he said. “Who said we need a hockey team or a basketball team? Hell with that. We’ve got a great horse racing team here.”

For Tiger Walk to make an impression at Preakness, trainer Ignacio Correas IV said, “he’ll need to step up.” Correas has tweaked Tiger Walk’s training — and is working him with blinders to improve his focus — after a fourth-place finish in the Wood Memorial.

“I think that he still has a lot to give,” Correas said. “I don’t know if he’ll give it in his next race.”