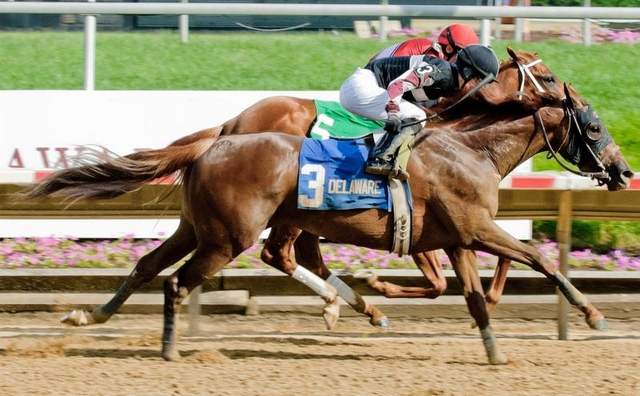 Wilmington, Del. – Sagamore Racing’s three-year-old filly, Tell a Great Story, stepped up in her first career stakes race to beat the favorite, Ile St. Molly, by a head-bob in the $75,000 Go For Wand Stakes at Delaware Park. She completed the mile-and-a-sixteenth distance in 1:40.80 and paid $15.80. The Sagamore-bred daughter of Bluegrass Cat has finished in the top three in all five of her career races, including three wins.

Named after the Hall of Fame filly owned by Christiana Stables, the Go for Wand serves as the local prep for the $300,000 Delaware Oaks on July 13. With today’s win, Tell a Great Story puts herself into the picture for next month’s Grade II race.

Sagamore Racing General Manager, Tom Mullikin said, “Hats off to Ile St Molly and her connections for a great stretch run. Tell A Great Story has always shown tremendous heart since the day she was born and we are very proud of her effort and that of the Sagamore Racing Team.” Mullikin added, “The lesson learned in her story is perseverance pays.”

Ridden by Forest Boyce, Tell a Great Story raced head-to-head with Ile St. Molly throughout the final furlong, hitting the wire with a nose in front. It was another 11 1/2 lengths back to Alli Leigh in third. What You Know, a five-length maiden winner in her career debut at Pimlico, was pulled up after six furlongs and vanned off as the 9-5 favorite in a field reduced to six by three scratches.

Missy Rules set things up for a stalker after going the first six furlongs in 1:11.24. Ile St. Molly, winner of the faster division of the Our Mims on opening day, moved to the lead on the far turn and was clear by a half-length with a furlong remaining before she was engaged by Tell a Great Story.