Sagamore Racing, Allen Rosenblum and The Club Racing, LLC’s Miss Temple City became the first filly in 22 years to win the 31st running of the $1,000,000 Grade 1 Shadwell Turf Mile Stakes at Keeneland Racecourse in Lexington, Kentucky. Before that, her last victory came by way of the Grade 1 Maker’s 46 Mile Stakes. Miss Temple City is the first filly to ever win the race.

Trained by Fair Hill, Maryland-based Graham Motion and ridden by jockey Edgar Prado, the four-year-old filly by Temple City out of Glittering Tax has an already historical 2016 campaign and now prepares for the Grade 1 Breeders’ Cup Mile.

“This is 100 percent about the filly Miss Temple City,” said Hunter Rankin, president of Sagamore Racing, after the Shadwell Mile. “We’ve believed for a long time that she is an elite horse and she proved it again today. This is a true team effort with Graham Motion, Edgar Prado, The Club Racing, LLC and Allen Rosenblum, and we couldn’t be more proud to be associated with these special people.” 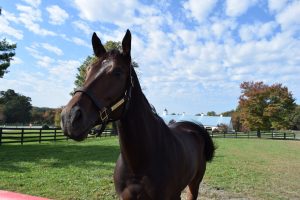