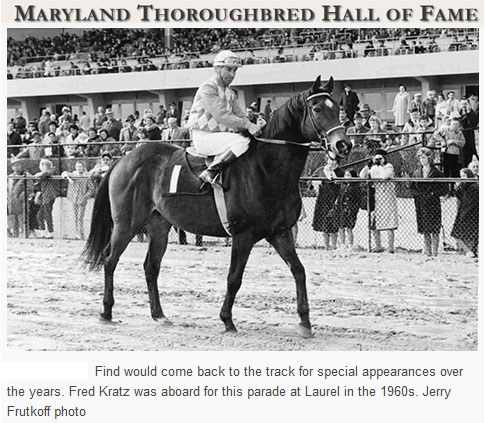 Baltimore, Md. — Maryland-bred Thoroughbred Hall of Fame (MTHOF) celebrations and commemorations were held at Pimlico Race Course during its program on Saturday, May 11. Among the inaugural class of inductees was Find, an Alfred Vanderbilt-bred gelding foaled at Sagamore Farm in 1950.

Find was a part of one of the best foal crops in horse racing history which included Native Dancer (foaled in Kentucky), Social Outcast, Home-Made, Crash Drive and Femme Fatlale. He didn’t make a start until his three-year-old year, but the son of Discovery raced longer than the others. Having raced until age 11, he was entered 110 times, won 22 races, with 27 seconds and 27 third place finishes. He retired in 1961 with $803,615 in earnings. He finished as Maryland’s all-time money winner (an accolade he held until 1982), and won or placed in 51 stakes.

Pending the establishment of a permanent Maryland-bred racing museum, www.mdthoroughbredhalloffame.com serves to distinguish the honorees with biographies, photos, videos and complete race records. That exhibit was supplemented on Saturday with ceremonies, remembrances and races named for inductees.
The MTHOF endeavors to celebrate the racing and studbook achievements of state-bred Thoroughbred horses nationally and internationally, and to showcase their enduring legacies.

Find is buried at Sagamore Farm along with National Thoroughbred Racing Hall of Famers, Native Dancer, Discovery and Bed O’ Roses. More about Find’s great racing career is on his MTHOF webpage.