Making his stakes debut on two weeks’ rest, Sagamore Farm’s He Hate Me was the recipient of a patient ride from Ricardo Santana, Jr., pounced on pacesetting Direct Dial (Too Much Bling) with round strides entering the final eighth of a mile and edged clear to take Friday’s Tremont S. with some authority. 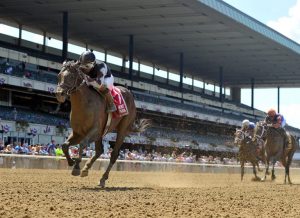 Exiting a popular victory going 4 1/2 furlongs over the Pimlico main track two Fridays back, He Hate Me took some pari-mutuel action from a morning line of 8-1 into 5-1 at post time and was content to sit a midfield trip as Direct Dial and Salmanazar (Shackleford) dueled through an enervating opening two furlongs in :22.09. Switched out into the fourth path at the three-sixteenths, He Hate Me lowered the boom on Direct Dial at the eighth pole and pulled away to take it by about three lengths. Admiral Jimmy (Jimmy Creed), a track-record setter at first asking at Gulfstream May 3, ran on nicely to just miss second.

“This is a really nice horse,” said Santana, who with the victory scored his first stakes win in New York. “The first time he ran, he broke bad and he still won the race. He’s a class horse. Today, when he broke, he was closer than the last time. At the three-eighths [pole], I just tapped him on the shoulder, and I then just waited. Turning for home, I took him to the outside and the second that he saw he was in the clear, he took off running again.”

The dam of a yearling colt by Flat Out, Quiet Holiday was most recently bred to Archarcharch. He Hate Me is the third black-type winner for Algorithms, now two of which are campaigned by Kevin Plank’s Sagamore Farm. Recruiting Ready, last-out winner of the Chick Lang S. on the Preakness S. undercard, will be one of the favorites in Saturday’s GII Woody Stephens S. Click for the Equibase.com chart or VIDEO, sponsored by Fasig-Tipton.