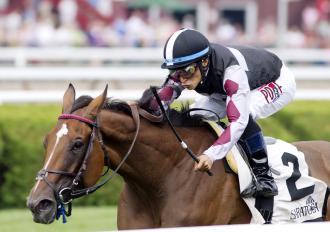 Saratoga Springs, NY – Sagamore Racing’s 3-year-old homebred filly, Daring Dancer, earned her fourth career victory with a late surge to win by a head in the $200,000 Grade 2 Lake George Stakes at Saratoga Race Course. Trained by Graham Motion, Daring Dancer saved ground along the rail early and swung three wide down the stretch to catch A Little Bit Sassy before the finish line.

“Daring Dancer showed a lot of grit and determination, and really personified the Sagamore spirit,” said Tom Mullikin, General Manager of Sagamore Racing. “Despite not having a good performance in her last race, Graham Motion and I believed in her, and it paid off today. This was a great win and I’m excited for the entire Sagamore team.”

Under regular jockey Alan Garcia, Daring Dancer ran 1 1/16 miles in 1:40.92 on the inner turf course and paid $8.30, $4.10 and $3.40. Garcia commented, “That was a very close race. Somebody had to win, [and] I was glad to win that race. She was comfortable all the way. Turning for home, I was looking for a hole, but I decided to move outside. She did it spectacularly.”

Daring Dancer improves her record to 5-4-0-0, bouncing back from a fifth place finish in the Wonder Again Stakes at Belmont Park on May 25. With today’s win, Daring Dancer becomes a two-time Graded Stakes winner for Sagamore Racing, adding to her Grade 3 win in the Appalachian Stakes at Keeneland on April 17.