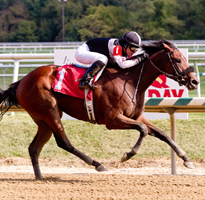 Sagamore Racing had a thrilling week, with three of its two-year-olds finishing in first place in each of their respective races. The week began with a victory by Give No Quarter in Race 2 at Presque Isle Downs on Tuesday, September 17. In his second career race, Give No Quarter finished in 1st by 22 ½ lengths. Daring Dancer followed with a win on Thursday, September 19 at Laurel Park, coming from behind to win her first race ever by 2 lengths in Race 7. The Sagamore Racing streak continued on Friday, September 20 as Naïve Enough broke her maiden in Race 6 at Laurel Park for Sagamore’s third consecutive victory. She finished 1st by 7 ¾ lengths.

“Ignacio did a great job of having Naive Enough ready today for her maiden win,” said General Manager Tom Mullikin. “Today’s win caps off a great week for Sagamore’s two-year-olds. All three won in impressive fashion. Hopefully they all stay healthy and continue to improve. I’m happy that our staff’s hard work is being rewarded.”