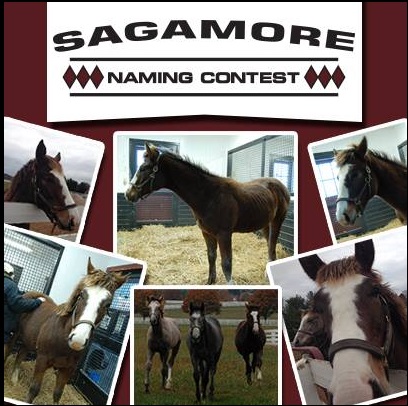 Glyndon, Md. — Sagamore Racing today announced its second annual Naming Contest. Fans will have the unique opportunity to name one of Sagamore Racing’s Thoroughbreds, who was born during the Super Bowl XLVII “blackout.” Online submissions open on December 18 at Facebook.com/SagamoreRacing.

Fans are encouraged to submit a name, in accordance with The Jockey Club regulations, for the soon-to-be yearling colt by Include out of the mare Dictate the Tempo, by Broad Brush. Voting will run from Wednesday, December 18 to Friday, January 17, 2014. The Sagamore Racing team will announce the Top 5 names on Monday, January 20, that will then be available for final public voting.

“We look forward to interacting with the Thoroughbred industry and our loyal fan base to name our soon-to-be yearling,” said Tom Mullikin, Sagamore Racing General Manager. “We saw great success last year with over 400 submissions for our two-year-old Tizgale, who recently broke her maiden in exciting fashion at Gulfstream Park. With the strong tie to the Baltimore Ravens and their Super Bowl XLVII victory, we’re excited to see what interesting names Ravens Nation will submit for our young Thoroughbred this year.”

All Thoroughbreds, regardless of their actual date of birth, turn one year older on January 1st to keep age groups easily defined for race conditions.

In mid-January, fans will vote for their favorite name online. The winning name will be announced on Tuesday, January 28. The fan who submits the chosen name will receive a Sagamore Racing gift, including a tour of Sagamore Farm, Sagamore Racing branded gear and a chance to attend the horse’s first local race.