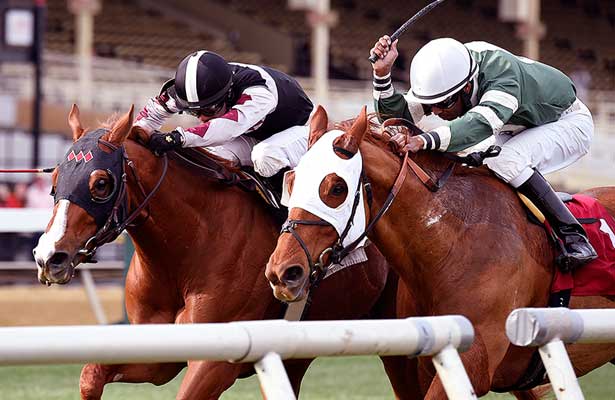 Baltimore, Md. — Sagamore Racing homebred Hamp, four-year-old gelding of Sky Mesa – Vienna Affair (GB), by Red Ransom, today won by a head in the $100,000 Henry S. Clark Stakes at Pimlico Race Course in his third start of the year. He completed the one-mile distance on the on the turf in 1:39.66 and paid $18.80.

Javier Santiago was aboard the Ignacio Correas IV trainee, who reached in the final jumps to beat Roadhog, while Nutello finished a close-up third. The victory was the first stakes win for Hamp, and the second stakes win in the last three days notched by Sagamore Racing. Hamp’s half-brother of Daring Dancer, was the winner of the Appalachian Stakes in Keeneland on Thursday, April 17, 2014.

“Javier worked the horse for me last week and got along very well,” Correas said. “The horse has been doing fantastic. I told him to make sure he was behind horses and keep him covered up as long as you can. When I saw that pace I got really excited. I knew he was going to be running at the end. He had to work real hard for the win today, but that’s what you expect against a field of very good horses.”

Hamp was named in memory of the late Bill “Hamp” Hampton Jr., a close friend to Sagamore Farm.