The Road to the Kentucky Derby officially begins Saturday at Churchill Downs as eight promising 2-year-olds, including graded stakes-placed juveniles Recruiting Ready and Thirstforlife, were entered in Saturday’s 35th running of the $150,000 Iroquois Presented by TwinSpires.com (Grade III) at 1 1/16 miles. 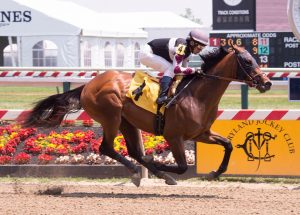 The Iroquois, one of four stakes events on the first Saturday of the 11-day September Meet at Churchill Downs, is the first scoring race on the 2016-17 “Road to the Kentucky Derby” – the series of 35 races that will ultimately determine the field for the 143rd running of the Kentucky Derby Presented by Yum! Brands (GI) on Saturday, May 6, 2017. Points awarded to the Top 4 Iroquois finishers will be 10-4-2-1 as part of the 19-race “Prep Season” that showcases foundation-building races in advance of the “Kentucky Derby Championship Series,” which begins in late February.

Sagamore Farm’s Recruiting Ready is likely the horse to run down in the eight-horse Bashford Manor. The Maryland-based colt returns to Churchill Downs in an attempt to stretch his brilliant speed over two turns after two hard-luck losses against graded stakes company. The Kentucky-bred son of Algorithms was caught in the final strides of June’s Bashford Manor (GIII) as the 1-2 favorite by Classic Empire in the second-fastest renewal of the six-furlong race (1:09.39). Then, in the Aug. 14 Saratoga Special (GII) over 6 ½ furlongs, it was Florida invader Gunnever’s turn to run down the 1-2 favorite after Recruiting Ready ran the first half-mile in a swift :45.04. Recruiting Ready was subsequently disqualified from second to fourth for bumping rivals down the stretch.

“(Jockey Irad Ortiz Jr.) just said he idled a bit there at the end and backed off the bit,” trainer Horacio DePaz said after the Saratoga Special. “It seems like he likes to run better when he’s on the bit. It’s just a little immaturity. He thinks he has it done and then he backs off. He always gets run down. He looked pretty comfortable, and that horse (winner Gunnever) was flying there at the end. That’s a pretty nice little horse to run him down.”

DePaz has secured the riding services of California-based Hall of Fame jockey Gary Stevens aboard Recruiting Ready. The duo will break from post 7.

Gary Barber and St. Elias Stable’s Thirstforlife enters the Iroquois off a third-place finish in the Best Pal (GII) at Del Mar behind the impressive Bob Baffert-trained Klimt, who’d return to win the Del Mar Futurity (GI). Thirstforlife, a Stay Thirsty colt trained by Mark Casse, broke his maiden at Churchill Downs by 6 ½ lengths in early June at odds of 1-9. He’ll be reunited Saturday with top jockey Florent Geroux, who was aboard the Kentucky-bred in his career debut that resulted as a third-place finish in the $100,000 Kentucky Juvenile on Kentucky Derby week.

The Iroquois is carded as the eighth race at 5:59 p.m. (all times Eastern) on an 11-race card that begins at the special post time of 2:30 p.m. With a nationally-televised ACC showdown between the 10th-ranked University of Louisville football team and second-ranked Florida State at nearby Papa John’s Cardinal Stadium on Saturday at noon, track officials proactively moved back Saturday’s post time so fans could enjoy the best of both worlds and to help ease area traffic. Those who attend the big game are invited to visit Churchill Downs afterward free of charge on Saturday simply by showing their ticket stub.

The Iroquois shares Saturday’s spotlight with the 48th running of the $200,000 Pocahontas Presented by TwinSpires.com (GII) for 2-year-old fillies, a 1 1/16 mile event that kicks off the “Road to the Kentucky Oaks” and is part of the Breeders’ Cup “Win and You’re In Juvenile Fillies Division.”