This past Saturday, May 28, two-year-old colt Recruiting Ready broke his maiden during his career debut at Pimlico in Race 1. He is the first winner for sire Algorithms and was named a TDN Rising Star! He was also the first two-year-old to get to the races for Sagamore this season. Under Edgar Prado, he finished strong, winning by 10 1/4 lengths. Watch the thrilling replay here. 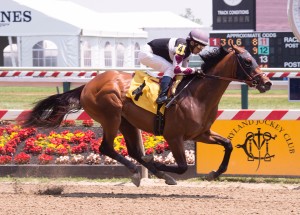 Recruiting Ready joined the Sagamore Racing team in March when he was purchased at the Fasig Tipton Florida sale. Trainer Horacio DePaz says he has been training well since day one when all of the horses arrived back from Florida. Bred at Claiborne Farm, Recruiting Ready is by Algorithms out of Need, by Strong Hope.

President Hunter Rankin says, “He’s a very nice horse and we’re lucky to have him in the barn.  Stanley did a great job finding him down at the Florida sale and Horacio has done awesome work with him since he arrived here in Maryland.  If he stays happy and healthy, we’re hoping to have a little more fun with him this year.”