Two-year-old Recruiting Ready is entered to run on Sunday, August 14 in the Grade 2 Saratoga Special! He won his first race at Pimlico earlier this year, and he finished second in the Grade 3 Bashford Manor Stakes at Churchill Downs. 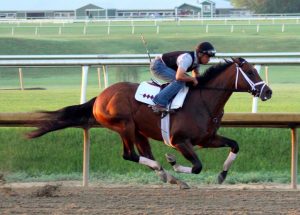 Recruiting Ready joined the Sagamore Racing team in March when he was purchased at the Fasig Tipton Florida sale. Trainer Horacio DePaz says he has been training well since day one when all of the horses arrived back from Florida. Horacio is Recruiting Ready’s exercise rider and trainer.

“He’s really moved forward in his training when we removed the blinkers,” said De Paz. “We wanted to get him to slow down a little bit, and finish up at the end of his works. Honestly, he’s been training better than he was before with the blinkers. He’s definitely been more focused in his works without them.”

Post time for the Sagatoga Special (R9) is set for 5:40 pm. Fans can watch the race LIVE on Fox Sports 2!