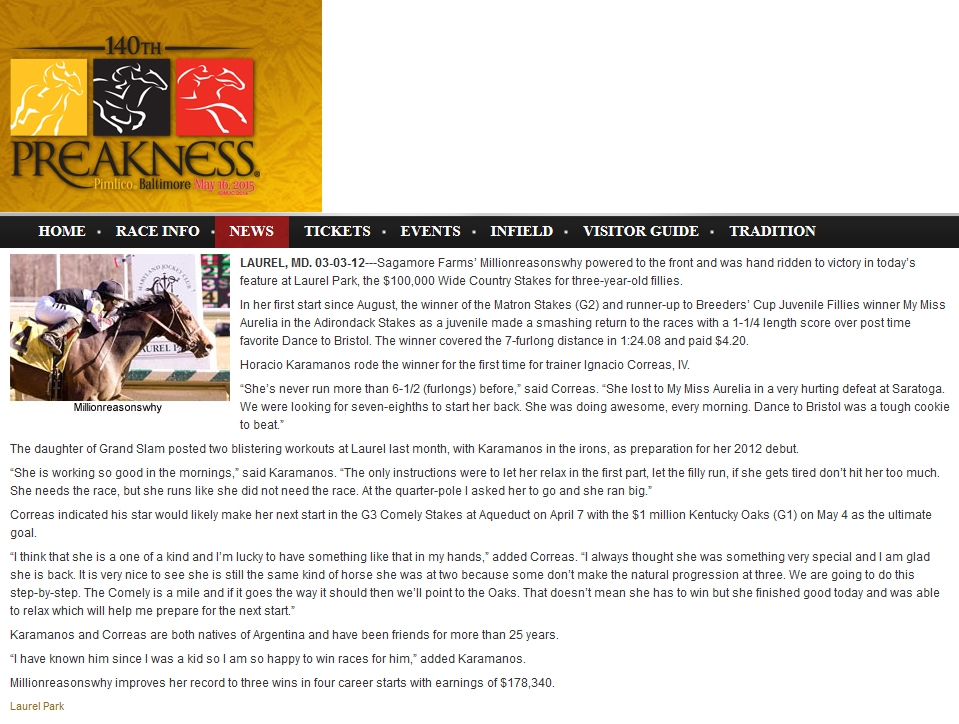 LAUREL, MD. 03-03-12—Sagamore Farm’s Millionreasonswhy powered to the front and was hand ridden to victory in today’s feature at Laurel Park, the $100,000 Wide Country Stakes for three-year-old fillies.

In her first start since August, the winner of the Matron Stakes (G2) and runner-up to Breeders’ Cup Juvenile Fillies winner My Miss Aurelia in the Adirondack Stakes as a juvenile made a smashing return to the races with a 1-1/4 length score over post time favorite Dance to Bristol. The winner covered the 7-furlong distance in 1:24.08 and paid $4.20.

“She’s never run more than 6-1/2 (furlongs) before,” said Correas. “She lost to My Miss Aurelia in a very hurting defeat at Saratoga. We were looking for seven-eighths to start her back. She was doing awesome, every morning. Dance to Bristol was a tough cookie to beat.”

The daughter of Grand Slam posted two blistering workouts at Laurel last month, with Karamanos in the irons, as preparation for her 2012 debut.

“She is working so good in the mornings,” said Karamanos. “The only instructions were to let her relax in the first part, let the filly run, if she gets tired don’t hit her too much. She needs the race, but she runs like she did not need the race. At the quarter-pole I asked her to go and she ran big.”

Correas indicated his star would likely make her next start in the G3 Comely Stakes at Aqueduct on April 7 with the $1 million Kentucky Oaks (G1) on May 4 as the ultimate goal.

“I think that she is a one of a kind and I’m lucky to have something like that in my hands,” added Correas. “I always thought she was something very special and I am glad she is back. It is very nice to see she is still the same kind of horse she was at two because some don’t make the natural progression at three. We are going to do this step-by-step. The Comely is a mile and if it goes the way it should then we’ll point to the Oaks. That doesn’t mean she has to win but she finished good today and was able to relax which will help me prepare for the next start.”

Karamanos and Correas are both natives of Argentina and have been friends for more than 25 years.

“I have known him since I was a kid so I am so happy to win races for him,” added Karamanos.

Millionreasonswhy improves her record to three wins in four career starts with earnings of $178,340.