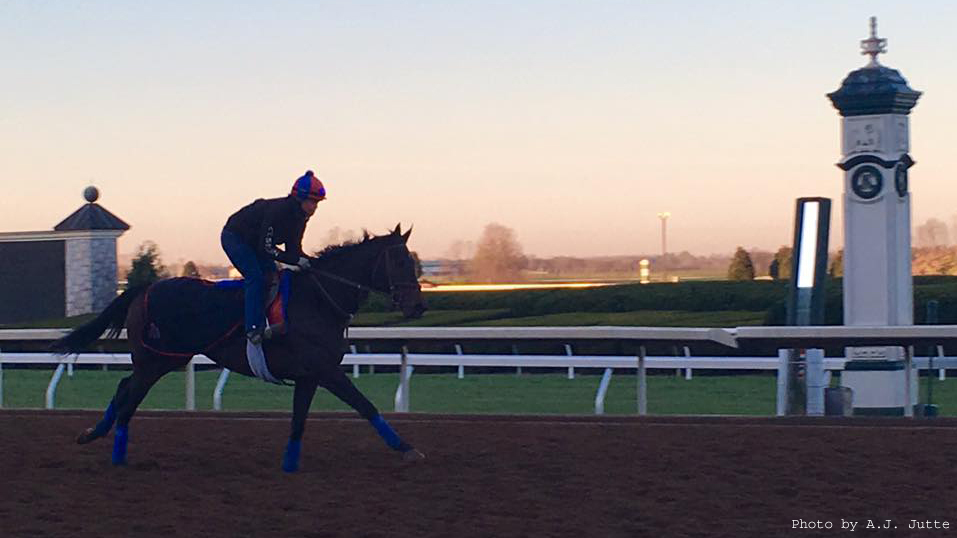 Sagamore Farm, Allen Rosenblum and The Club Racing LLC’s Miss Temple City is scheduled to make her 2016 debut against the boys in Friday’s $300,000 Maker’s 46 Mile (G1).

The 4-year-old Kentucky-bred daughter of Temple City also had been entered in Saturday’s $350,000 Coolmore Jenny Wiley (G1) against fillies and mares, but trainer Graham Motion said the filly would run Friday.

“We decided to run Friday,” Motion said. “We entered for Saturday just to see who would show up and check the post positions.”

In the Maker’s 46 Mile, Miss Temple City will carry only 113 pounds and receive five to seven pounds from her rivals.

“Drayden (Van Dyke) had ridden her before and can make the weight,” Motion said. “If Drayden had not ridden her previously, I wouldn’t do it.”

Van Dyke was aboard Miss Temple City in her most recent start, a runner-up finish in the Queen Elizabeth II Challenge Cup Presented by Lane’s End (G1) here last fall.

“She is bigger and stronger than she was last year,” Motion said. “We had always planned to start her back this weekend. I don’t think the past performances tell the whole story with her. I think she should have won the Queen Elizabeth last year.”

Motion has won nine graded stakes here the past two years and in 2011 had Animal Kingdom do most of his major preparation for his Kentucky Derby (G1) victory here.

“His first crop will be 2-year-olds here next year,” Motion said about Animal Kingdom, who stands at nearby Darley at Jonabell. “I have one myself and I hope I get some of his offspring (to train).”

Much of Motion’s staff who was here for Animal Kingdom is with the trainer’s current string at Keeneland, including David Nava, Animal Kingdom’s exercise rider.