The connections of Miss Temple City, who became the first female winner of the Maker’s 46 Mile (gr. IT) last out April 15, have confirmed the filly will be pointed to the £175,000 Duke of Cambridge Stakes (Eng-II) at Royal Ascot.

Following her impressive Maker’s 46 triumph at Keeneland, trainer Graham Motion had indicated he was considering a return to Royal Ascot for the 4-year-old filly, who finished a close fourth in last year’s Coronation Stakes (Eng-I). 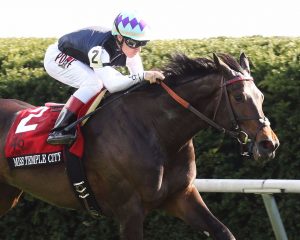 “It was an awesome performance from Miss Temple City at Keeneland last time out and she has come out of the race great,” said Sean Feld of The Club Racing, which owns the Temple City filly along with Sagamore Farm and Allen Rosenblum. “We were not expecting to win (the Maker’s 46), and she ran much better than we all thought she would.”

Motion has said Miss Temple City was entered in the Maker’s 46 in an effort to avoid facing champion grass mare Tepin, who a day later set a stakes record in winning the Jenny Wiley (gr. IT). Tepin is being pointed to a Kentucky Derby day stakes start and then the Queen Anne Stakes (Eng-I) at Royal Ascot.

“She has grown and looks totally different to what she looked like last year,” Feld said. “She is bigger and has much more weight on her. She has gone from being a nice big filly to basically looking like a colt.

“She is really doing well and it is all systems go for Royal Ascot. It was an unbelievable day for us when she finished fourth in the Coronation Stakes last year. I would say it was as much fun as we could have had without actually winning.

“The Falmouth Stakes at Newmarket (July 8) is also be on the radar for her. It is obviously difficult to say what race you will go to after her next race but Newmarket is definitely an option for her.”

As she was a year ago, Miss Temple City will be stabled at the yard of trainer David Lanigan for her Royal Ascot assault.