Daring Dancer brought Sagamore Racing the eighth filly of the 2017 foaling season without a single colt born yet! She is by Medaglia d’Oro and was born at 5:00am on Wednesday, April 19.

Medaglia d’Oro won many stakes races including the G1 Travers Stakes and G1 Whitney Handicap, and he finished second in the G1 Belmont Stakes, G1 Breeders’ Cup Classic, and G1 Dubai World Cup. He is sire to the 2009 Horse of the Year Rachel Alexandra and 2015 champion 2YO filly Songbird.

In 2014, Daring Dancer won the G2 Lake George Stakes at Saratoga and was named Maryland-bred 3YO Champion Filly of the Year! 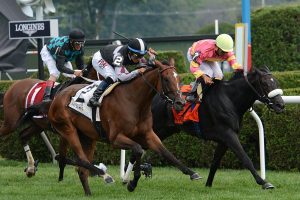 Last year she had her first foal, a colt by Uncle Mo. Uncle Mo went undefeated in his 2YO season in 2010 and was a record breaking Champion Freshman sire in 2015.