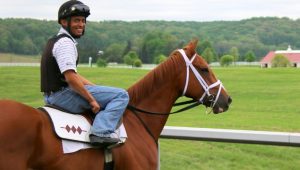 The racing stable of Under Armour founder Kevin Plank came to a crossroads in 2015 when Hunter Rankin took the helm as the president of the historic Sagamore Farm operation based in Glydon, Md.

The original plan devised by Rankin and adviser Stanley Hough was to keep a group of horses at Sagamore with newly-promoted farm trainer Horacio De Paz and to send the cream of the crop to established top conditioners like Todd Pletcher, Kiaran McLaughlin or Graham Motion.

Quickly though, Rankin and Hough, who was recently retired from his own successful training career, came to the conclusion that they had a budding star right there on the farm in De Paz. And so at the age of 30, the Texas native received a dream assignment as one of the few private trainers in American racing, a role hearkening back to the previous glory days of Sagamore when it was owned by Alfred G. Vanderbilt Jr. Not only did Plank, Rankin and Hough see fit to keep the Sagamore homebreds locally-based with De Paz, they also beefed up his roster with young horses from yearling and 2-year-olds in training sales.

This year, the rest of the racing world has received a convincing view of what the Sagamore brass saw in De Paz.

Through the close of the Saratoga meet on Labor Day, DePaz’s Sagamore charges in 2017 have collected 24 wins from 80 starts for more than $1.16-million in purse earnings and an impressive strike rate of 30 percent. Already, those stats are well above the stable’s full-year results from 2016: 11 wins from 64 starts and purse earnings of $547,988.

Highlights this season have included a stakes win on Preakness Day with Recruiting Ready, which was more than welcome on a showcase weekend for Sagamore at Pimlico and at the farm just a half hour up the road from Baltimore; a stakes win during the Belmont Stakes festival with one of those auction acquisitions, He Hate Me; and a nice return from De Paz and company’s first dedicated presence at Saratoga, yielding four wins.

The icing on the cake at Saratoga was a breakthrough stakes triumph by Ginger N Rye in the Smart N Fancy Stakes, nearly two years to the day since she provided De Paz with his first-ever victory. 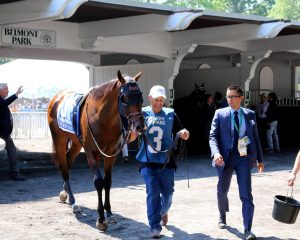 “That was special, to do it with Ginger N Rye,” said De Paz, a native of Snyder, Texas, who got his feet wet in horse racing during his teens riding Quarter-Horse match races. “When I first took the job, it was a period of transition and it has evolved each year and the quality of horses that [Rankin and Hough] have been buying at the sales has been better and better.

“It’s a great, unique opportunity that I am in, especially working for someone like Kevin who is very driven and passionate and the type of person that he is. It is a lot of pressure, because you want to compete at the high end. We didn’t necessarily have the right horses to do that and it’s developed with the quality of horses that they have been buying and the farm has been breeding that we can go and hold our own on the big days or in places like Saratoga or Keeneland.”

De Paz certainly was familiar with top quality horses, having worked as an exercise rider for Pletcher for more than four years, putting stars like Quality Road and Uncle Mo through their paces. He joined Sagamore as an assistant farm trainer in 2011.

“He came up under the right people,” Rankin said. “It was taking a shot with a young guy. He was here, he knew the horses, and we quickly determined that Horacio was something special. He was going to be successful no matter where he went. He just needed someone to bet on him.”

De Paz still gets on horses himself each morning, often for key workouts.

“When a horse is really doing well, he has a very good feel for it, and that’s been a huge advantage,” Rankin said. “He is usually pretty on the money with what they are going to do in the afternoon.”

Sagamore does keep a string of horses at Laurel Park, where DePaz usually begins his mornings before moving on to the farm about 35 miles away to oversee the rest of the roster. Another division was based at Saratoga this summer, and a group of horses will be shipped south to Palm Meadows Training Center in Boynton Beach, Fla., for the winter.

“It is a big job but Horacio has shown that he is up to the challenge,” Hough said. “He has the passion, he has the right experience and he has very good instincts. As a trainer, you are depending on the team of people around you. There is only so much you can do yourself, and so we have all worked to put the right team together, and everyone likes working with Horacio – the people working for him and the people he is working for. He is just right person for the job.”