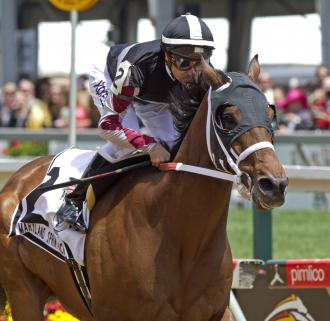 Tizgale falls behind in The Very One Stakes; Hamp set for the Dixie Stakes (G2) at 5:27 p.m.

Baltimore, Md. — Sagamore Racing, a professional horse racing team based at historic Sagamore Farm, secured a win in Race 5 on Preakness Day with Happy My Way, a four-year old gelding of Wilko – Holy Queen, by Holy Bull, in his first race wearing the Sagamore silks on Preakness Day in the Maryland Sprint

Handicap (G3) at Pimlico. He covered the six-furlong distance over the fast main track in 1:09.21, scoring by 5 ¾ lengths over Lemon Drop Dream.

“It was a tremendous effort, said Tom Mullikin, general manager, Sagamore Racing. “That was our first win on Preakness Day and we did it in our own backyard, which is a great dream. There was definitely some anticipation leading up to it. There were some butterflies.”

Happy My Way was recently purchased by Sagamore with a majority ownership share earlier this month. Under previous ownership, Happy My Way has captured five wins in 14 starts, including a victory in the Sir Shackleton Stakes in his last outing on March 29, 2014.

Tizgale, a three year old Sagamore bred filly of Stormy Atlantic – Tizthen, by Tiznow, fell to the back of the pack in Race 6, The Very One Stakes.

Hamp, four-year-old gelding of Sky Mesa – Vienna Affair (GB), by Red Ransom, is set to hit the turf in Race the historic Dixie Stakes (G2), the undercard to the Preakness Stakes. Hamp is 16-4-0-4 with his most recent win in the Henry S. Clark Stakes on April 19 on the turf at Pimlico. Hamp, a Sagamore homebred, finished third in his first career race at Pimlico on May 5, 2012 and earned his maiden win on June 7 at Colonial Downs in just the second race of his career.