LAUREL, MD – Second in three of four starts this year including a pair of local stakes, Sagamore Farm homebred Ginger N Rye looks to break through with her first black-type victory in Saturday’s $150,000 Lady Baltimore at Laurel Park. 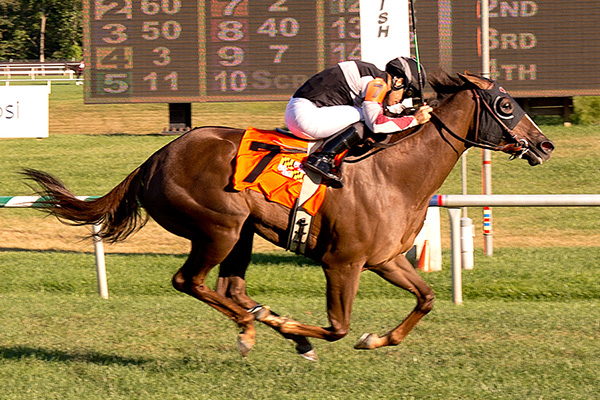 Ginger N Rye, a 4-year-old daughter of More Than Ready, returns to a Laurel turf course where she has three wins and three seconds from nine career starts. She was beaten a half-length after being in tight quarters early in the Dahlia Stakes April 16, and came up a head short as the favorite in the All Brandy Stakes June 25.

“We’d like to win it for her,” trainer Horacio DePaz said. “I still have her two-other-than condition, and I would have liked to run her in that condition and then run her in a stake to build her up and kind of get her some confidence; not that she’s not doing right, but just to take advantage of that condition.

“But it’s kind of the end of the year and there’s not any other stakes races here at Laurel and I don’t want to go somewhere else,” he added. “This just seemed like the logical spot. Hopefully, she can get it done. If not, we’ll come back in a two-other-than and bring her back for next year and see. She should be able to mature and continue to campaign. She’s a pretty honest filly.”

DePaz took Ginger N Rye to Saratoga Race Course off her All Brandy effort and she was dead game in an open second-level optional claiming allowance going one mile, holding the lead past the eighth pole before giving way late to lose by a head. She has breezed three times since that July 24 race, most recently going a half-mile in 49 seconds Sept. 3 at Laurel.

“I was very, very pleased that she could leave Maryland and compete in a two-other-than at Saratoga. She put in a dogfight there,” DePaz said. “She’s a small filly and she got stuck on the rail with a big filly on the outside of her, so she definitely had to fight her way through. It was a pretty good effort.”

Trevor McCarthy will ride from post 3 of eight at 118 pounds.

Among Ginger N Rye’s rivals in the Lady Baltimore is New York shipper Robillard, trained by Kiaran McLaughlin for Godolphin Racing. The 4-year-old Distorted Humor filly is also seeking her first stakes win, having run third in the Sheepshead Bay (G2) May 7 at Belmont Park.

“She has graded stakes black type from before, but we’re trying to win a stake with her. She’s training very well and training great, so we thought this was a good spot,” McLaughlin said. “She’s been in tough a couple of times but she’s done well this year. She’s really come back well. We gave her time off for quite a while and just kept her in the barn and she’s looking good and doing well. Hopefully it’s not too tough.”

Last time out, Robillard sat just off the pace on the outside but encountered traffic trouble at the three-sixteenths pole and weakened to finish sixth in the De La Rose Stakes Aug. 6 at Saratoga. She was a gate-to-wire winner of an optional claiming allowance at the Lady Baltimore distance June 23 at Belmont.

“The last one was a tough race,” McLaughlin said. “She had a rough trip and still only got beat a few lengths. Hopefully she fits there well. It’s not going to be easy but we’re happy with her. She’s doing well.”

Jevian Toledo, coming off Laurel’s summer meet title, has the call from outside post 8 at 118 pounds.

Drawing the rail is Charles J. Reed’s multiple stakes winner Monster Sleeping, making her fourth start of the year and third straight in stakes company. She was fourth, beaten 1 ¼ lengths in the All Brandy and third after having to steady and being carried out in the six-furlong Jameela Aug. 20 at Laurel.

Rounding out the field are Catcha Rising Star, a winner of two straight including the West Virginia Senate President’s Cup Stakes Aug. 6 at Mountaineer; Onus, who captured the Commonwealth Oaks (G3) last fall at Laurel; 2016 Santa Ana (G2) winner Tuttipaesi; Vielsalm, runner-up in the Gallorette (G2) May 21 at Pimlico; and McArthur Parkway.

Laurel Park is a Stronach Group company, North America’s leading Thoroughbred racetrack owner/operator. The Stronach Group racetracks include Santa Anita Park, Gulfstream Park & Casino, Golden Gate Fields, Portland Meadows, Laurel Park and Pimlico Race Course, home of the world-famous Preakness. The company owns and operates the Palm Meadows Training Center in Florida and is one of North America’s top race horse breeders through its award-winning Adena Springs operation. The Stronach Group is one of the world’s largest suppliers of pari-mutuel wagering systems, technologies and services. Its companies include AmTote, a global leader in wagering technology; Xpressbet, an Internet and telephone account wagering service; and Monarch Content Management, which acts as a simulcast purchase and sales agent of horseracing content for numerous North American racetracks and wagering outlets. The Stronach Group is also a leading producer of social media content for the horseracing industry. For more information contact David Joseph at david.joseph@marylandracing.com or call954.658.7156