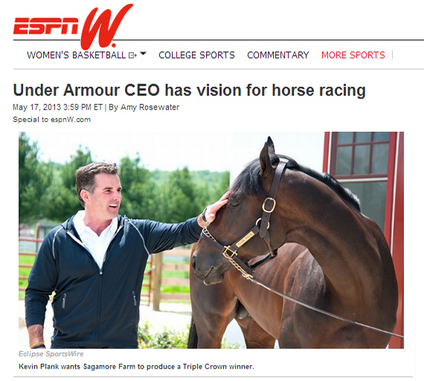 When Kevin Plank first set foot on Sagamore Farm about seven years ago, the 530-acre tract of land looked nothing like it once had — in its glory days when Alfred Vanderbilt Jr. ran things in the 1930s.

Back then, Vanderbilt (yes, that Vanderbilt family) developed the farm into one of the pre-eminent horse racing farms, and in 1953, one of its horses, Native Dancer, won the Preakness Stakes and the Belmont Stakes. The following year, Native Dancer graced the cover of Time magazine.

Decades later, the farm fell into disrepair. Horse racing was no longer in its heyday. By 1986, the farm that Vanderbilt had developed into a world-renowned racing and breeding operation was no longer operating. There was some talk of turning the farm into a museum. Many farms in Maryland had been sold to housing developers or have been transformed into golf courses.

So when Plank, the founder and CEO of Under Armour, came to the farm with his longtime friend Tom Mullikin nearly 20 years later, he was met with dilapidated roads, barns that were falling apart and stables in poor condition.

Despite that, in 2007, Plank did what no one else had wanted to: He purchased the farm.

“I thought he was crazy,” Mullikin said.

But Plank, 40, has a way of doing things that few people would, and that is part of what has made him so successful in the business world. And these days, with the Preakness Stakes coming up Saturday in nearby Baltimore (Glyndon is just 17 miles from the city’s downtown), Plank is making people see things a little differently.

Mullikin, for one, is a believer.

“Maybe a handful of guys who saw this place were actually interested in the farm itself,” said Mullikin, the farm’s general manager. “Not many folks would’ve taken this on. Folks who really care about Sagamore and its history should be grateful to Kevin.

“This is a Maryland treasure, and it’s good to see a place like this brought back to life.”

And it’s hard not to be converted to his frame of mind when you talk to him. After all, how many people thought it was a good idea to take on companies like Nike and Adidas when he started Under Armour? Probably not many, but a heck of a lot probably wish they had.

The sports apparel company Plank founded in his grandmother’s basement in 1996 reached $1.8 billion in revenues in 2012.

His more recent challenge has been on the horse racing stage. He began by building a 9-mile fence around Sagamore Farm (it now measures 18 miles); he refurbished two barns and rebuilt the training barn. He also rebuilt the three-quarter-mile training track, which has a synthetic track made of none other than recycled Under Armour performance material.

Walking around the farm today, you wouldn’t know you were anywhere near an urban area. Aside from the occasional sound of a tractor or the crowing of a rooster named Spinks (after boxer Leon Spinks), things are pretty quiet in this neck of the woods.

The grass is green, there are rolling hills and there is a gorgeous 10,000-plus-square-foot house overlooking the farm that Plank uses for board meetings and hosting VIP guests. Framed newspaper articles are hung throughout the house, touting the success of Native Dancer (who is buried on the farm) as well as newer stories about Plank and his clothing business.

There are 25 employees at the farm, including Mullikin, who lives on the property with his wife and their five children. The farm stables nearly 70 horses.

Plank is a busy guy with his apparel business, but he has been bitten by the racing bug. Mullikin said he will sometimes see Plank pull up to the farm unannounced on a Saturday morning. Sometimes, Plank said, he comes to visit the horses or just to think.

“Sometimes I’ll come by and throw my son in a four-wheeler and just drive around,” said Plank. “I’ll walk by the stream and it just clears my head.”

This weekend — Preakness weekend — has become one of the biggest dates on Plank’s calendar. His VIP tent at Pimlico has become one of the hottest spots at the track. Among some of the high-profile athletes expected to attend are Baltimore Ravens wide receiver Torrey Smith, Buffalo Bills defensive tackle Marcell Dareus, former Pro Bowler LaVar Arrington, golfer Scott Stallings and Olympic gold medalist bobsledder Steve Holcomb.

But Plank isn’t in this game for the Preakness parties. He is a competitor and plans to win in horse racing as he has in business.

“This farm is not about nice fences and new barns,” Plank said. “It’s about an attitude.”

Plank’s goal is to have Sagamore Farm produce a Triple Crown winner. Obviously it’s lofty, since no horse has achieved that feat since Affirmed in 1978.

Although Sagamore does not have a horse entered in the Preakness Stakes this year, it will be well represented at the track. On Preakness day Saturday, Sagamore’s Listen Boy will run in an allowance race; Heat Press is entered in the James W. Murphy Stakes; Charged Cotton will race in the Grade 3 Gallorette Handicap; and Humble and Hungry runs in the Grade 2 Dixie Stakes.

The first time Plank went to Pimlico, he was a student at the University of Maryland, and he and his buddies hit the road from College Park, Md. They came with a keg and a couch in a truck.

“I didn’t know what this thing could be,” Plank said. “I’m a passionate person. I guess I’m just addictive like that.