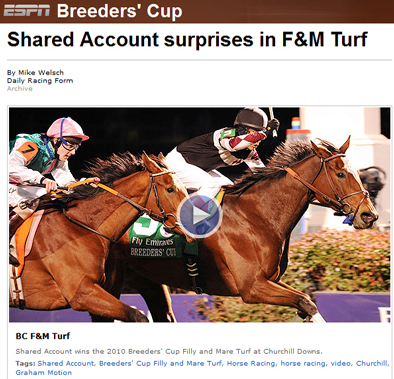 LOUISVILLE, Ky. — Shared Account paid $94, the largest winning mutuel in the history of the $2 million Breeders’ Cup Filly and Mare Turf, but to her trainer, Graham Motion, this was no upset.

“We were always pointing to this race,” Motion said. “I don’t think it was very fair that she was written off after only one bad race.”

That bad race, a fifth-place finish over boggy Belmont turf in the Oct. 2 Flower Bowl, a lack of a Grade 1 win, and the presence of defending champion Midday turned Shared Account into a 46-1 longshot. But that did not put off Motion, who sent 27-1 Better Talk Now out to victory in the 2004 BC Turf.

Shared Account, ridden by Edgar Prado, succeeded in her first try where Motion’s excellent turf mare Film Maker had failed in three efforts, a third-place Filly and Mare Turf finish in 2005 sandwiched between runner-up placings in 2004 and 2006. In 2006 at Churchill, Film Maker was beaten only by the great Ouija Board. Midday, a winner of three straight Group 1 races in Europe coming into this race, seemed a comparably formidable foe.

Midday, though, failed to deliver the same kind of knockout stretch punch she had last year at Santa Anita. Racing inside much of the trip, Midday beat a path off the rail, just outside Shared Account, and after bumping slightly with fading Miss Keller at the top of the stretch, Midday had every chance to accelerate and justify her 4-5 odds.

“Although she ran a great race, she probably was not quite at her best,” Cecil said.

This was the best race of Shared Account’s career, but the performance didn’t surprise Motion, who said the filly had been pointed toward the Breeders’ Cup since the start of her 2010 campaign. Last year at 3, Shared Account showed her class with a win in the Grade 2 Lake Placid Stakes before finishing second in a pair of Grade 1 stakes, the Garden City and the Queen Elizabeth II. This year, Shared Account started her season with a fourth-place finish in the Gallorette Stakes, then won the All Along before getting nipped by Proviso in the Diana at Saratoga. A midsummer break came about by design, and with the yielding-turf prep in her pocket, Shared Account came to Louisville ready to roll in the 1 3/8-mile Filly and Mare Turf — a fact known by only a few.

Breaking near the front under Prado, who won his first Breeders’ Cup race since 2006, Shared Account raced in third behind pace-setting Plumania for most of the trip, as the leader set fractions of 25.64 seconds for the opening quarter, 50.32 to the half, and 1:15.94 for six furlongs. Pressing Eclair de Lune was the first to attack, coming after the leader passed the three-furlong pole. Down inside, Queally began aggressively urging Midday while steering off the fence. Eclair de Lune drifted wide, and Midday, after gaining her footing following the bump, briefly appeared to have the momentum. But in the final furlong she could not shake the filly down to her inside, as Shared Account battled back and seized the advantage before the wire. The winning margin was a neck, while another neck behind came Keertana, who rallied strongly through the stretch on the far outside. She was followed by Red Desire, Hot Cha Cha, Eclair de Lune and Forever Together, who dead-heated Hibaaayeb, Miss Keller, Harmonious, and Plumania. The winner was timed in 2:17.74 over a firm turf course.

Shared Account, by Pleasantly Perfect out of Silk n’ Sapphire, was bred by William Carl and sold as a yearling for $170,000 to the Sagamore Farm of Kevin Plank.

Sagamore, a farm in Maryland, once was owned by the Vanderbilt family, and was purchased in 2007 by Plank, the CEO of the Under Armour apparel company. Shared Account was Sagamore’s first Breeders’ Cup starter.