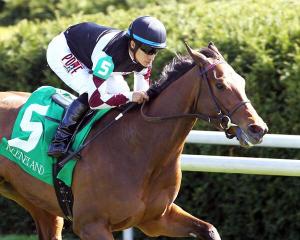 Lexington, Ky. — Sagamore Racing homebred filly, Daring Dancer (Empire Maker – Vienna Affair (GB), by Red Ransom) today won the $100,000 Appalachian Stakes at Keeneland in her first start of the year. She completed the one-mile distance on the turf in 1:36.04 and paid $12.60 as the post time favorite.

Daring Dancer, under jockey Alan Garcia, broke outwardly, settled off the inside in mid-pack and took closer order through the second turn. She was bottled up entering the stretch, but steadied near the three-sixteenths marker to split rivals. Once clear, she kicked away to place first by 2 ½ lengths over Sweet Acclaim.

Lead by trainer Graham Motion, notable for his work with 2011 Kentucky Derby winner Animal Kingdom, this was Daring Dancer’s third consecutive win and she improves to 3-0-0. Prior to the Appalachian Stakes, the Sagamore homebred broke her maiden in her first start as a two-year-old at Laurel Park on September 19, 2013, followed by another win finish weeks later at Churchill Downs.

Daring Dancer notched the first Stakes win for the Sagamore Racing team in 2014.