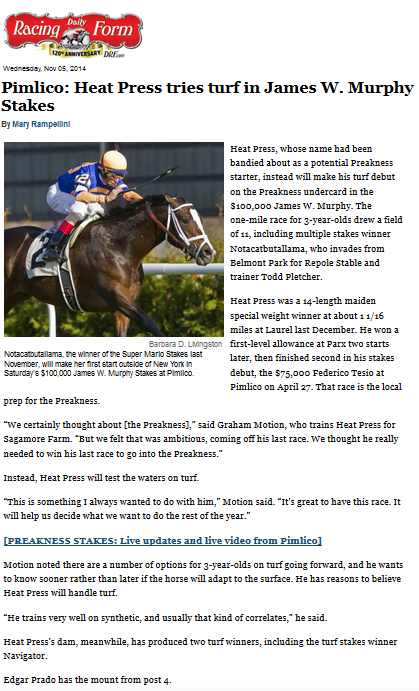 Heat Press, whose name had been bandied about as a potential Preakness starter, instead will make his turf debut on the Preakness undercard in the $100,000 James W. Murphy. The one-mile race for 3-year-olds drew a field of 11, including multiple stakes winner Notacatbutallama, who invades from Belmont Park for Repole Stable and trainer Todd Pletcher.

Heat Press was a 14-length maiden special weight winner at about 1 1/16 miles at Laurel last December. He won a first-level allowance at Parx two starts later, then finished second in his stakes debut, the $75,000 Federico Tesio at Pimlico on April 27. That race is the local prep for the Preakness.

“We certainly thought about [the Preakness],” said Graham Motion, who trains Heat Press for Sagamore Farm. “But we felt that was ambitious, coming off his last race. We thought he really needed to win his last race to go into the Preakness.”

Instead, Heat Press will test the waters on turf.

“This is something I always wanted to do with him,” Motion said. “It’s great to have this race. It will help us decide what we want to do the rest of the year.”

Motion noted there are a number of options for 3-year-olds on turf going forward, and he wants to know sooner rather than later if the horse will adapt to the surface. He has reasons to believe Heat Press will handle turf.

“He trains very well on synthetic, and usually that kind of correlates,” he said.