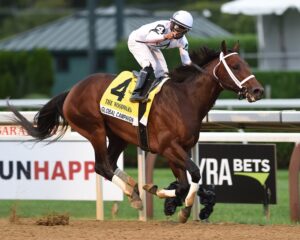 ‘TDN Rising Star’ Global Campaign (Curlin) was sent straight to the front by Luis Saez and refused to lose in Saturday’s GI Woodward S. at Saratoga.

The 2019 GIII Peter Pan S. winner led through fractions of :24.65 and :48.89 with heavily favored Tacitus (Tapit), a jaw-dropping winner last out of the GII Suburban S., just waiting to pounce in second. Global Campaign held a narrow advantage as they hit the quarter pole and took off from there while hanging on his left lead down the stretch to gamely register a career high.

Third in last summer’s GII Jim Dandy S. at the Spa, one spot behind Tacitus, Global Campaign won two of his first three trips to the post this term, headed by an ultra-game victory in the GIII Monmouth Cup S. last time July 18.

“I gained a lot of confidence in his last race when he took a couple challenges and drew off a bit,” said winning trainer Stanley Hough, who earned his first Grade I victory since Request for Parole annexed the 2004 United Nations at Monmouth Park. “I thought that was a good sign. His 1 1/8-mile races were pretty good between the Peter Pan and the last race. One thing about this horse: if he’s ever got to lead at some point or another, he’s won the race. The only time he hasn’t won, he never got the lead.

Hough continued, “I’m more than satisfied. He beat a good horse. We’re all excited. It’s a great win. That’s what the game is all about. You try to develop horses that will go on and be a sire and I believe he’ll make a good one.”

Pedigree Notes:
What a mare. It’s been well documented that the winning A.P. Indy mare Globe Trot produced only three foals before passing away in 2016, but Global Campaign’s Woodward win pushed her into rare territory indeed: two Grade I winners, including young stallion Bolt d’Oro (Medaglia d’Oro), plus MSW & MGSP Sonic Mule (Distorted Humor) from those three foals. Sold as a yearling for $100,000 in 2009, Globe Trot hails from the longtime Claiborne family of MGSW Trip (Lord At War {Arg}) and SW Tour (Forty Niner). A.P. Indy is, of course, one of the preeminent broodmare sires of this generation with more than 220 stakes winners produced by his daughters to date, including Saturday’s GII Jim Dandy S. winner Mystic Guide (Ghostzapper). Global Campaign is a son of Curlin, two-time Horse of the Year and sire of 68 black-type winners and 33 graded winners with his ninth crop of juveniles this year. Eleven of Curlin’s 125 career stakes horses are out of A.P. Indy mares with Global Campaign being the first to reach Grade I status.