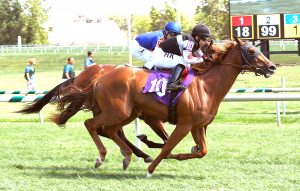 Hunter Rankin, president of Sagamore Racing, is thrilled to see what’s in store for Chubby Star: “We’ve always thought she had some talent. Ocala Stud had her this winter and they always liked her as well. She ran great and she should improve off of that effort.  We’re excited about her future.”

Chubby Star is a filly by Malibu Moon out of Salsa Star. Malibu Moon is the only stallion to sire multiple Kentucky Derby and Preakness contenders in 2015. He is currently at Spendthrift Farm in Kentucky, and he has sired other fillies in training at Sagamore Farm: Purpose of Life and Future Show.