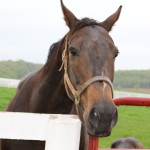 On this day 10 years ago, Under Armour founder and CEO Kevin Plank purchased Sagamore Farm, implementing a long-term restoration plan with the mission to breed, raise and race Thoroughbreds at the highest level. 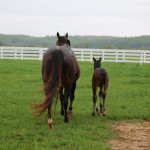 Roadtohanna was the very first horse purchased by the Sagamore team. She is by Not For Love out of December Ember, by Lord Gaylord. This horse has been a part of Sagamore Farm for the past 10 years and has been an especially incredible mom, playing a role in the team’s commitment to Maryland breeding.

Roadtohanna has eight foals, including a handsome yearling colt by Super Saver, a two-year-old filly by Into Mischief, three-year-old Gowith Theterrain by Scat Daddy, listed stakes winner Tell a Great Story, and stakes-placed All I Karabout.

Last year, the 82nd annual Maryland Horse Breeders Association’s Maryland-bred yearling show crowned Roadtohanna’s filly by Into Mischief as Grand Champion. The winner of Class IV (for fillies conceived in states other than Maryland), the bay filly was one of 115 yearlings to compete in this year’s show, the largest number to be judged since 2004. Read more here.

Roadtohanna’s filly by Into Mischief