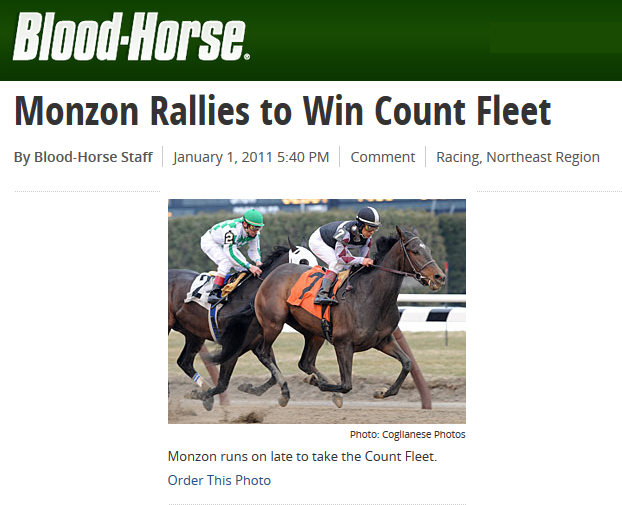 Sagamore Farm’s homebred Monzon, returning to dirt after making three starts on the grass, commenced his sophomore season with a last-to-first victory in the $65,000 Count Fleet (VIDEO) on New Year’s Day at Aqueduct.

Monzon raced 8 1/2 lengths behind the leader through a half-mile in a quick :47.52, began to bridge the deficit on the final turn, shifted to the grandstand side in upper stretch, and reeled in J J’s Lucky Train with a sixteenth left to prevail by a length in the Count Fleet for 3-year-olds.

“I rode him last time on the grass and I thought he was a grinder,” said winning jockey Edgar Prado. “I was kind of surprised that he was running without the blinkers for the first time on the dirt, but he broke OK, sat in the back of the pack, and came with a run. I think that the race set up beautifully; everybody went early and I was happy when I saw that.”

Monzon broke his maiden by 12 1/2 lengths on dirt at Laurel Park in August and doubled his win tally with a 5 1/4-length triumph in a starter allowance over the Delaware Park turf in September. The gelded son of Thunder Gulch ended a two-race winless streak in the Count Fleet, having finished fifth in the grade III Bourbon at Keeneland and third in the Gnomes Gold at Belmont Park Oct. 31.

“We were eventually going to come back to the dirt with him,” said Ignacio Correas, who trains Monzon for Kevin Plank’s Sagamore Farm. “We took the blinkers off to try and relax him. The plan was that if he ran well in the Count Fleet, we’d look ahead to the Whirlaway (Aqueduct, Feb. 5), which is what we will probably do. He’s still a little green and has things to learn. We don’t know his limit yet.”

Pants On Fire finished third, ahead of Arthur’s Tale, Tap Star, and Rush Now. Isn’t He Perfect was scratched.