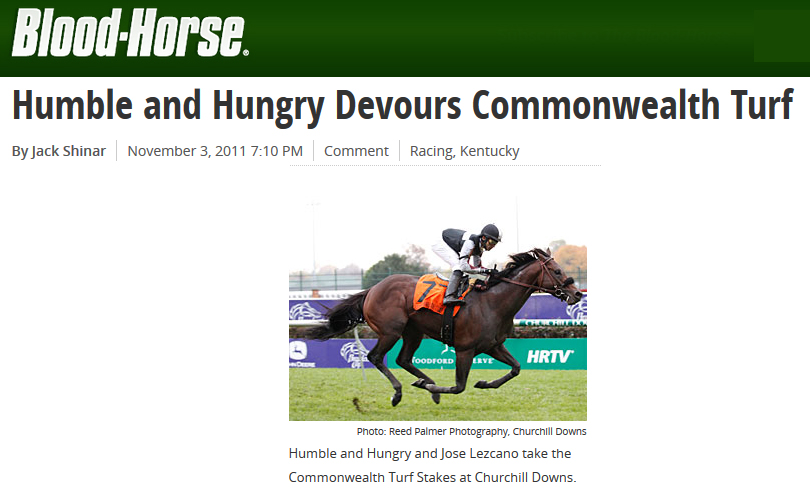 Louisville, Ky. — Humble and Hungry earned the first stakes victory of his career when he soared past his rivals near mid-stretch to easily upset the $111,200 Commonwealth Turf Stakes (gr. III) over good ground at rainy Churchill Downs Nov. 3.

On the eve of the two-day Breeders’ Cup World Championships at Churchill, a steady afternoon rainfall resulted in the scratch of morning line choice Pluck as well as five others, including three from the also-eligible list. The defections left the 1 1/16-mile test for 3-year-olds with a field of seven.

Angled five paths wide for the drive by jockey Jose Lezcano, 11-1 shot Humble and Hungry won while eased down by 1 1/4 lengths over Wilkinson, who rallied belatedly to edge Silver Medallion by a half-length for the place spot. Salto, the 2-1 favorite for French trainer Freddy Head, finished fifth in his United States debut, beaten by five lengths. The final time was 1:45.24.

“The horses in front of us were going at a pretty good pace for how soft the turf was today,” Lezcano said. “We were able to wait and then I asked him at the quarter pole and I knew he was going to win. He really took off the final sixteenth of a mile. I think he really liked the soft going.”

This was the first win in six starts in 2011 for Humble and Hungry, who has not been out of the money this year with two seconds and three thirds.

Sold for $200,000 at the Ocala Breeders’ Sales Co. Spring Sale of Two-Year-Olds in Training last year, Humble and Hungry is owned by Sagamore Farm and trained by Ignacio Correas IV. The Limehouse   colt had finished third in both Hill Prince Stakes (gr. IIIT) at Belmont Park in June and the Hall of Fame Stakes (gr. IIT) at Saratoga Aug. 12. He raced without blinkers in the Commonwealth Turf.

Out of the Langfuhr mare Cukee, the bay was bred in Kentucky by Rose Hill Farm.

Humble and Hungry settled between horses in mid-pack early as Live in Joy, breaking from the rail, took command early over Perregaux while posting quarter-mile fractions of :23.53, :48.49, and 1:14.15. Live in Joy was soon headed and gave way readily to Perregaux, who held a narrow edge over Silver Medallion nearing mid-stretch. But neither could match strides with Humble and Hungry, who dug in on the outside after grabbing the lead and edged away.

Wilkinson, under Garrett Gomez, waited for room at the three-sixteenths pole and rallied belatedly to get second over the tiring Silver Medallion and John Velazquez. Perregaux was 2 1/2 lengths farther back in fourth, followed by Irish-bred Salto, Chalice, and Live in Joy.

“He started just OK and we had to stay behind horses early on,” said Salto’s jockey, Olivier Peslier. “When we got to the top of the stretch, he just couldn’t accelerate.”

Humble and Hungry was coming off a second-place finish in a first-level allowance race on the inner turf at Belmont Oct. 6, which was his first start since the Hall of Fame Stakes. He has been extremely consistent on the grass, compiling a 2-2-2 mark in seven tries. His only out-of-the-money performance came when he was eighth in last year’s Breeders’ Cup Juvenile Turf (gr. IIT) at Churchill, which was won by Pluck.

“He was super impressive,” said Bob Feld, representing Sagamore Farm. “Rarely do you see a horse win geared down like that in a grade III. Lezcano suggested that we take the blinkers off and that helped, and he also got the perfect trip. This is a huge move forward and could be a turning point in his career.”

Besides Pluck, other scratches were Suntracer and Twinspired, and also eligibles Fleet Beat, Friends Place, and Will’s Wildcat.