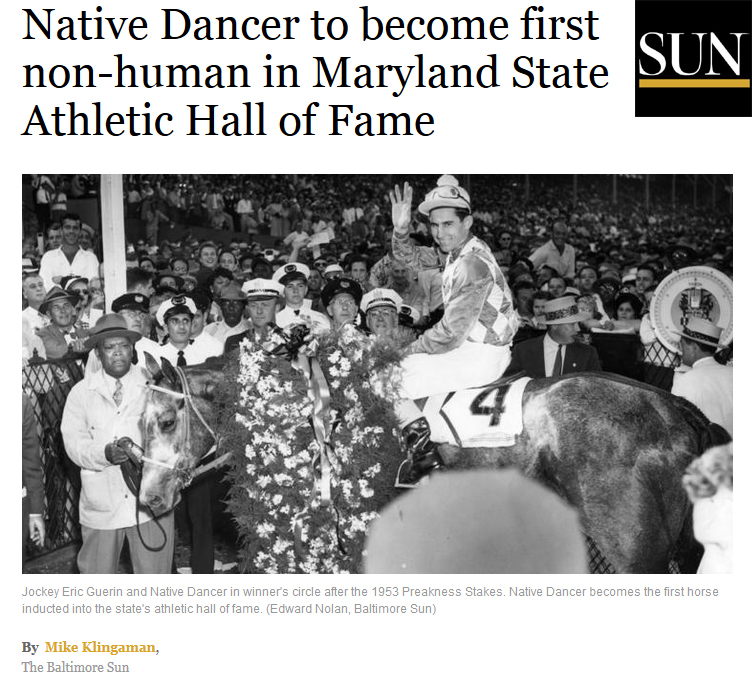 For more than half a century, the Maryland State Athletic Hall of Fame shooed race horses from its door. But that changes Thursday night when the first thoroughbred is inducted, albeit posthumously, into the 234-member Hall.

Who better to break through the grass ceiling than Native Dancer, winner of the 1953 Preakness and Belmont Stakes and the pride of Sagamore Farm in Glyndon? One of the most celebrated equines ever, Native Dancer won 21 of 22 races, made the cover of Time magazine, became the world’s highest-priced stallion and lived a cushy life.

“He had every possible amenity known to man, from an air-conditioned stall to a private rail car when he traveled,” said Alfred Vanderbilt III, son of the horse’s owner. “It means a great deal to our family that the Maryland Hall of Fame will induct him; I know my dad is smiling, wherever he is. It’s a unique honor for Native Dancer to be in such company.

“I’ll bet he’ll be the only one there who ate hay and oats willingly.”

“We’ve been thinking about inducting [the horse] for several years,” Walter said. “Our bylaws say that any athlete is eligible. Well, a lot of racing people think the horse is the athlete and the jockey is along for the ride.”

Five others will also be enshrined at the organization’s 55th induction ceremony at Michael’s Eighth Avenue in Glen Burnie, which is sold out. Swimmer Beth Botsford (Garrison Forest) won two gold medals in the 1996 Olympics (100-meter backstroke and 400-meter relay medley). Kimmie Meissner, a Towson native, won the 2006 world figure skating championship and the U.S. title a year later. Bob Scott, an All American midfielder in lacrosse at Johns Hopkins in 1952, coached the Blue Jays for 20 years and won seven national championships.

In another first, the MDSAHoF will induct two athletes who each starred in two big-league sports — Brian Jordan (who went to Milford Mill) and Tom Brown (of Silver Spring). Jordan played safety for three years in the NFL with the Atlanta Falcons (1989-1991) before spending 15 years playing baseball in the majors, mostly with the St. Louis Cardinals and Atlanta Braves. The All-Star outfielder batted .282 and had two game-winning hits in postseason play.

Brown attended Maryland, where he also played both sports. In football, he set Atlantic Coast Conference records for both receptions and interceptions and, in 1963, was drafted No. 2 by the champion Green Bay Packers. An All-American in baseball, Brown signed instead with the Washington Senators, made the team as a first baseman and started on Opening Day as a rookie against the Orioles.

A year later, he switched sports, suited up for Green Bay and became a starting safety for the Packers’ Super Bowl champions of the 1966 and 1967 seasons.

“I’m privileged and honored to be joining a lot of people whom I’ve watched and played against,” Brown said.

Now 73, he runs a sports youth camp in Salisbury and recalled his own early days as a two-season athlete.

“When Maryland offered me a football scholarship, my dad told them I wanted to play baseball in the spring,” Brown said. “Coach Tom Nugent said no, so dad stood up and said, ‘OK Thomas, let’s go.’

“Nugent said, ‘Where are you going?’ Dad said, ‘We’re going to Virginia where they’ll let him play both sports.’ Well, Dad made that up, but it worked. Nugent said I could play baseball as long as I made the starting team.”

All inductees except Native Dancer are expected to attend the ceremony, which will also honor the late Earl (Papa Bear) Banks, Morgan State’s legendary football coach, with the John F. Steadman Lifetime Achievement Award. Banks coached the Bears from 1960-73, won two bowl games and never had a losing season at Morgan, which won 31 straight during his tenure.