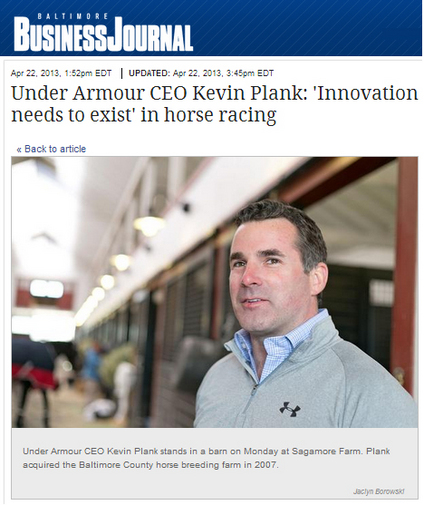 That’s how much of his time Under Armour Inc. CEO Kevin Plank estimates he spends at Sagamore Farm, the 530-acre Baltimore County horse breeding farm the 40-year-old purchased in 2007.

Whether he’s there or not, Sagamore Racing in Glyndon is expected to have a busy race season. Walkwithapurpose, a three-year-old bred at the farm, is expected to race at the Black-Eyed Susan Stakes at Pimlico Race Course on May 17, a day before the 138th annual Preakness Stakes.

With the Kentucky Derby kicking off the Triple Crown in less than two weeks, the Baltimore Business Journal talked with Plank on Monday about progress at Sagamore Farm, the role of television in horse racing and the future of the sport.

You’ve said Sagamore Farm is entering its second chapter. What does that mean?
I think it’s about winning. I think it’s about putting [together] a great story. The first part of the story was mostly how to deal with the history — the legacy of Sagamore Farm, the impression people have that it is so great to see Sagamore Farm return and beautiful again. We’re very proud of that.

If we’re just for white fences and barns, I think we’re really missing it. The expression “big hat and no cattle” is nothing we want to live. We want to be in the big races, we want to be in the competitive races. I think that comes from attitude and just having a way of doing business. The form that we have at Sagamore is very similar to the form we have at Under Armour (NYSE: UA). It begins with people, it begins with team. It begins with really fast race horses too.

How will television factor into the future of horse racing?
I don’t know if we’ve figured it out yet. I think there is room for bigger ideas and better opportunities. I think Churchill Downs has demonstrated their flexibility to change with implementing things like the points system this year, which is a great shot of trying to get some organization.

You know, these 20 horses are showing up on the first Saturday in May and everybody is saying ‘Where did they come from?’ Frankly, there is not a great story of where they came from. So I think the points system is a great step in that, and I think there are other things that can be done. I think you’ll continue to see that. Innovation needs to exist and it needs to live in the sport of racing.”

How do you tell the story behind a race horse?
Winners help a lot, of course. And being in the big races. The problem with racing is, take last year — you’ve got a champion like I’ll Have Another that comes out of nowhere, it was a longer shot than most. It comes out and wins the Kentucky Derby the first Saturday in May and then two weeks later wins the Preakness in a heart stopping race. You’re going, ‘Wait a second, we love this horse.’ Three weeks goes by and the Friday before potentially winning the Triple Crown, not only is the horse scratched but it’s sold and shipped off to Japan. You’ll never see the star again.

Imagine you start with the Ravens, where whether Ray Lewis plays for the Ravens this year or not people are still showing up wearing their jerseys and their pants saying, ‘This is my team.’ With racing, you start all over again. I think we can do a better job of getting people saying, ‘Who do I love in racing?’ Typically, it’s about a horse, and those horses come and go pretty quickly. I think if we can create a little more consistency and history in the teams themselves, and getting people rooting for the teams themselves, I think we have a much better chance at building something.

What needs to change for that to happen?
Look at any other franchise. I mean, the three-point shot [in NBA] didn’t exist [34] years ago and it was the evolution of what the game needed. Look at all the rule changes that have taken place in football and other things.

People, they want to tie themselves to this sort of legacy. I think the difficulty of not having central leadership is something that has been very difficult in racing. There are good people trying to do the right things, from the New York Jockey Club and Churchill. But I think there’s a need for many of them to come together. I think that’s one of the things hopefully we can bring, and I can bring, is this sort of naivete. I’ve got this statement at Under Armour that says ‘Always been smart enough to be naive enough to not know what we couldn’t accomplish.’

I don’t know that this group didn’t like that group, and this person upset that person. We can come in and say ‘Wow, this is what racing could be. How do we create something that does that?’ I don’t have all the answers for you yet, but I’ve also got a day job. I get to spend about five percent of my time on Sagamore and most of it is the recreational aspect. But I can’t help just grilling my head for something that would make people really care about racing.