n Friday, August 7, former Sagamore Farm owner Alfred G. Vanderbilt was formally inducted into the National Museum of Racing’s Hall of Fame as a Pillar of the Turf.

Vanderbilt’s son, Alfred III, accepted the honor on his behalf, and when speaking about his father’s passion for the sport at the induction ceremony, said “(Racing) was his slice of heaven.”

The Pillars of the Turf category is designated to honor individuals who have made extraordinary contributions to Thoroughbred racing at the highest national level. Candidates must be deemed to have represented the sport with indisputable standards of integrity and commitment through disciplines such as breeding and ownership, leadership, innovation, philanthropy, promotion and education.

Vanderbilt took ownership of Sagamore Farm when it was bequeathed to him for his 21st birthday in 1933. 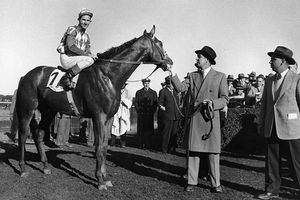 Under Vanderbilt’s legendary guidance the farm was internationally recognized as a premier training and breeding facility for the next half century.

The Hall of Famers are buried on the grounds at Sagamore Farm.