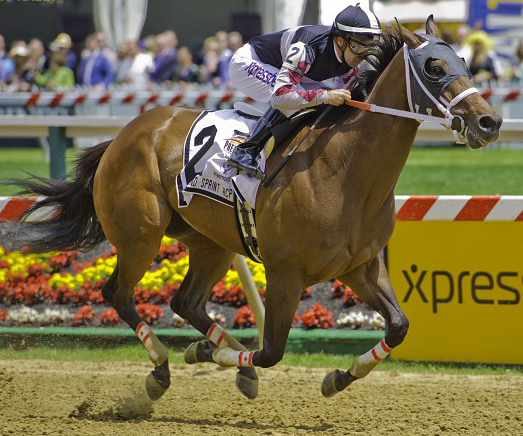 Laurel, Md.  — Thirty-four sprinters have been nominated to the 23rd running of the $350,000 Frank J. De Francis Memorial Dash at Laurel Park next Saturday, Nov. 15.

Among those pre-entered are horses from the powerful barns of D. Wayne Lukas, Steve Asmussen, Kieran McLaughlin and Chad Brown.

Bern Identity won three stakes races in a 35-day period this summer for trainer Kelly Breen, including the Dave’s Friend Stakes at Laurel on September 6, before a third place in the Phoenix Stakes (G3) at Keeneland last month.

“That horse has been here for a week,” Blind said. “He worked a bullet (half-mile in 46 seconds) Wednesday morning. Kelly has been looking forward to this race.”

Happy My Way has finished first or second in five of six this year, including a score in the Maryland Sprint Handicap (G3) at Pimlico Race Course on Preakness day.

La Verdad has six stakes victories in 10 starts this year and finished second in the Barbara Fritchie Handicap (G2) at Laurel in February.

Ben’s Cat is an intriguing nomination.Though he is famous for being one of the top turf sprinters in the country, the King Leatherbury homebred is no slouch on the main track with 10 victories in 14 races on the dirt, including five stakes wins, and is 6-for-7 at the De Francis distance. Overall, the 8-year-old is 27-of-44 lifetime for earnings of $2,205,990.

“I would be surprised if he ran because King has won the Fabulous Strike with the Cat at Penn National the last two years,” added Blind. “I would love to have him but he owns that race and it gives him an extra 11 days coming out of the Maryland Million (October 18). At 8 years old you have to pick your spots.”